Public Health Minister Maureen Watt has written to Food Standards Scotland for advice on how Scotland could fortify flour with folic acid.

The advice will be used to help ministers decide how to pursue the policy on a Scotland only basis. The Scottish Government’s preference is for a UK wide solution, but the UK Government has so far failed to commit to the measure despite repeated requests.

The Welsh and Northern Irish governments have also publically backed the fortification of flour.

The Scottish Government believes mandatory fortification of flour with folic acid is the best way to reduce neural tube defects like spina bifida in unborn babies. Folate levels are low across the UK by international standards – particularly so in Scotland.

Ms Watt wrote again to UK Public Health Minister Jane Ellison on November 11 last year to ask the UK Government to consider mandatory fortification. However, she again failed to commit to the step.

“Our consistent position is that UK-wide mandatory fortification of flour is the best way to reduce neural tube defects. However, despite repeated requests it’s clear that the UK Government has no intention of doing so at this time.

“I have therefore asked Food Standards Scotland to provide some detailed advice on how we could do this on a Scotland-only basis. This advice will then be used to allow us to make a decision on what our next steps should be.

“There are far too many babies being born with Spina Bifida in Scotland – particularly in our more deprived communities. Folic acid is tasteless, entirely safe within recommended intake levels and is already included in many foods like breakfast cereals.

“There are 78 countries around the world that already have mandatory fortification of flour. The USA has done it for the past eight years, with no adverse effects on health. By joining them we can help to save many families from the heartbreak of being told their baby has Spina Bifida.”

“As Scotland’s independent public food body, we will be happy to provide the Scottish Government with the advice that has been requested. Such advice will fit well with our statutory duty to improve the diet of the Scottish population. The advice we provide will enable the Scottish Government to determine the best way forward to reduce neural tube defects. In doing so, we will draw on the previous body of advice provided by the Food Standards Agency as well as taking account of any new evidence and advice from the Scientific Advisory Committee on Nutrition.”
Tags: Neural Tube Defect Spina Bifida Folic Acid
Add a comment

He continues, “Additionally, if the mandatory fortification of flour with folic acid is not proceeding in the short term, then advice must be put in place to ensure that woman who are sexually active and of child bearing age are aware of the importance taking folic acid prior to conception and not once pregnancy is confirmed, which is the norm at present.” 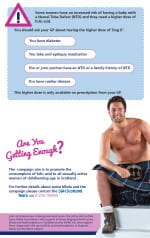 Scotland has more live births per head of population with spina bifida than anywhere else in the UK. Each week in Scotland one pregnancy is affected by spina bifida and/or hydrocephalus. Possibly due to religious and cultural differences, only 50% of pregnancies are terminated in Scotland as compared with 80% in the rest of the UK.

Taking folic acid supplements, at the correct recommended dose prior to conception, could prevent over 70% of these pregnancies from being affected and reduce both the number of those born with the condition and the number of pregnancies terminated.

Children born with spina bifida often have paralysis in the lower limbs, urological, neurological and orthopaedic problems which often become more significant throughout life. Fortification of flour would reduce the number of babies born with this life-long disability.

Parents in Scotland are offered impartial and non-judgmental advice by the SBH Scotland to enable them to make informed decisions about their pregnancy. Whatever the final decision, SBH Scotland will always be there for support and advice whenever needed. If you are affected by any of the issues associated with spina bifida or hydrocephalus, you can call the SBH Scotland Family Support Service helpline on 08459 11 11 12 or visit www.sbhscotland.org.uk