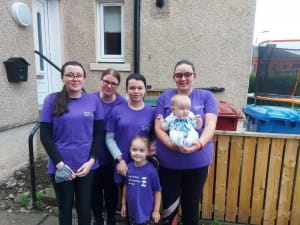 A Falkirk woman, whose eight month old baby grand-daughter has spina bifida and hydrocephalus, is part of a team which raised over £1,600 for Spina Bifida Hydrocephalus (SBH) Scotland to help other babies with the same condition.

Kirsty Brown, along with her daughter’s Hannah, Kyla and stepdaughter, Rachael, created their own 13 mile walking challenge from Bainsford to the Kelpies and asked friends and family to sponsor them.

Spina Bifida occurs early in pregnancy and Kirsty’s Step-daughter, Rachael, found out at the 20 week scan that her baby, Sophie, would be born with the conditions which led to a major operation within the first 24 hours of her life to close the hole in her back.

The money raised will be used to provide personalised home and hospital support for families with new born babies who have spina bifida and/or hydrocephalus.

Kirsty says, “We were sat one evening when a plan emerged to do something for this amazing charity. Before we knew it, a WhatsApp group was created and a date was set!

She continues, “We all thoroughly enjoyed the walk, although we were very tired! My four year old grand-daughter, Maisie, joined us at different bits en route which helped lift our spirits and we were spurred on at the end because baby Sophie was waiting at the finish line.”

SBH Scotland was formed in 1965 by a group of parents who each had a child with spina bifida and hydrocephalus. Over 55 years later, the charity now supports over 4,000 children, young people, adults, their family members and carers across Scotland.

Deborah Roe, fundraising director at SBH Scotland said; “We’re incredibly grateful to this lovely family who came together to support us. We’d like to thank them and all those who kindly donated, raising three times more than their original target of £500! Because of Covid-19 we lost half of our usual income last year; donations have never meant more than they do right now.”

If you’d like to support SBH Scotland this festive season donations can be made via sbhscotland.org.uk/donate or fundraising activities can be booked for next year. Anyone interested in helping raise money should contact Lynsey Hamilton, Fundraising Manager, on 03455 211 600 or email 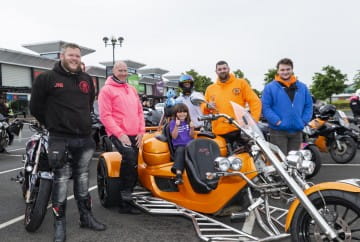