Dr Whiteford was diagnosed with spina bifida at birth and is paralysed from the waist down. Despite spending most of her life in a wheelchair, she has dedicated her time to charitable causes, taking particular interest in organisations that support lifelong conditions. 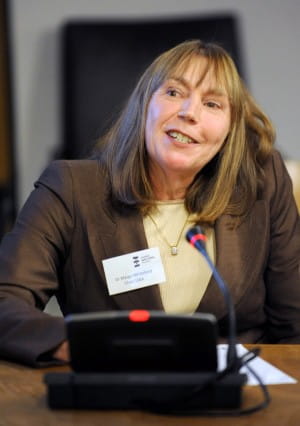 A longstanding member, and now chairperson, of Spina Bifida Hydrocephalus Scotland (SBH Scotland) Dr Whiteford is also a board member of the International Federation for Spina Bifida and Hydrocephalus and was elected president of the organisation in 2013. She is also chair of a global expert panel which looks to improve treatments for people with spina bifida on a worldwide scale, and she works closely with the Global Summit for Food Fortification in Tanzania.

Dr Whiteford dedicates her efforts to raising awareness of the complex conditions. In 2002 she took part in the Great North Run, where she not only completed the 13-mile event in her wheelchair, but managed to convince fellow competitor, Gordon Ramsay OBE to become an honorary patron of SBH Scotland. Since taking up the role in 2005, the TV chef has raised thousands of pounds for the organisation. In 2009 Dr Whiteford added to her long list of fund raising achievements when she completed the London Marathon, raising £15,000 in the process. She has also completed the Great Scottish Run on four separate occasions and most recently has zip wired across the River Clyde.

Chief executive of SBH Scotland Andrew H D Wynd MBE said, “I would like to offer my congratulations to Dr Whiteford whose support over the past 30 years has been indispensable to SBH Scotland. She is an incredible woman whose achievements demonstrate that physical disability does not have to be a barrier to success.

“As a voluntary member of organisations like ours, Dr Whiteford utilises her spare time to attend meetings and seminars across the world. Her dedication to improving the lives of those affected by these complex conditions is irrefutable and she is truly an inspiration to all of us.

He continues “Her parents were part of the original group that founded SBH Scotland back in 1965 with the aim of providing support to those affected by the condition. It is incredible that just 50 years later we are seeing their daughter being recognised for her own contributions to this cause. She is a tireless campaigner and the team at SBH Scotland could not be happier for her latest achievement.”

In her professional career, Dr Whiteford continues to break stereotypes, proving that being in a wheelchair does not preclude her from working in challenging environments. Originally graduating from the University of Dundee with a BSc in Pharmacology, she went on become a qualified medical practitioner. Today, she works as a consultant clinical geneticist at the Queen Elizabeth Hospital in Glasgow, where she has diagnosed, and supported hundreds of children and adults who are affected by genetic conditions.

The final word comes from Dr Margo Whiteford herself,

"I'm just glad that my parents are able to witness this after the gloomy picture that they were given about my future when I was born. To all parents of children with spina bifida never give up dreaming about what might be achieved."